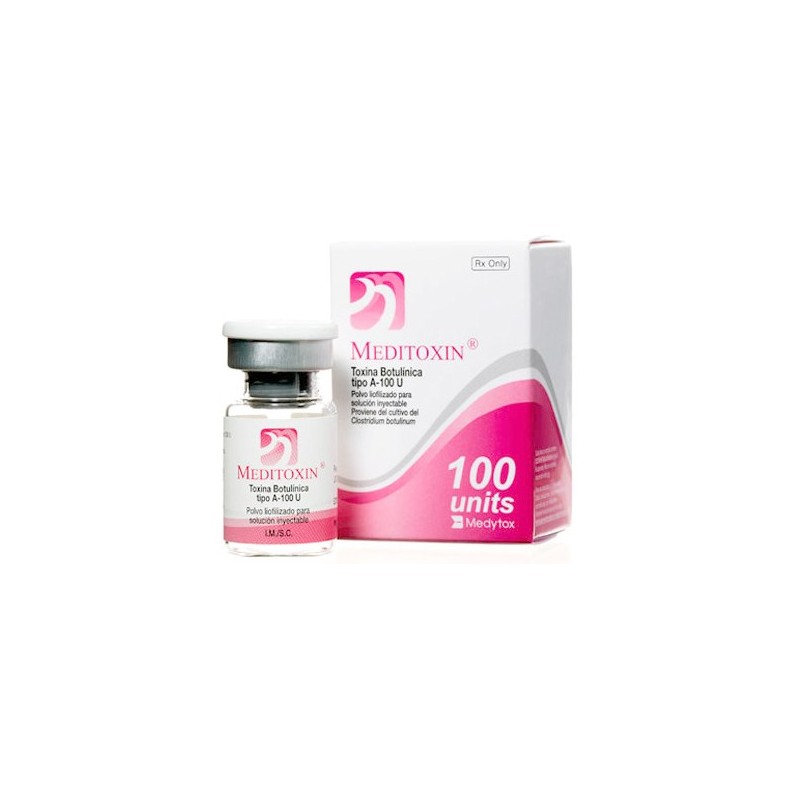 Injectable solution for adult patients seeking to temporarily improve, remove and correct the signs of aging, but it can be used as a therapy for TMJ, hemifacial spasm, blepharospasm and so on.

All materials and ingredients used in manufacturing the treatment are regularly in compliance with the health, safety and quality standards and regulations of the majority of Nations.

The product can be stored in the refrigerator between 8 and 12 degrees C °, or frozen at temperatures below -5 degrees C °.

Return policy in the event of errors on our part

Meditoxin 100 IU is a product that is entirely based on the Clostridium botulinum family of Botulinum toxins, also called Botulift, Sias, Neuronox and Cunox. is the name given by the company Medy-Tox Inc. for this botulinum toxin type A (100 units). It is curious that Clostridium Botulinum was studied by Korean scientists during the 1980s and who then founded a technology company, precisely Medy-Tox, to produce a Botulinum Toxin that could be used as a biopharmaceutical product. It took many experiments and many studies that involved various scientific subjects such as biology, biochemistry, immunology and toxicology to have a satisfactory and not a dangerous result, if and only if it is used by expert hands as an aesthetic doctor.

The vial containing the product looks empty, but there is a white powder in small quantities, which is why it can barely be seen. It is one of the many features of this particular product, but it is recommended not to use this treatment if there are discolouration or the bottle is tampered with.

There is not much to joke about botulinum toxin: the so-called OnabotulinumtoxinA is a product of certain bacteria that causes a disease called botulism, a very serious food poisoning caused by the bacterium Clostridium Botulinum, a secretion that naturally produces. Intoxication can occur in various forms, for example, due to the poor state of preservation of food, when the spores are accidentally ingested or through an open wound. If left untreated, the disease of botulism can be fatal: it causes respiratory paralysis and then passes into asphyxia, so it is advisable to observe the symptoms and be alarmed, especially if they appear very similar to simple gastroenteritis. In the case of aesthetic medicine, iatrogenic botulism is widespread when the proportion of botulinum toxin and saline solution is misdose, or more product than necessary is injected. For this reason, it is strongly not recommended to get the bites yourself, but it is better to seek a doctor expert in aesthetic medicine and rely on his care.

Studied by Korean scientists during the 1980s, only after many studies and experiments the company Medy-Tox Inc. was able to classify this treatment as a biopharmaceutical product, approved in most countries. The treatment can last up to six months, but to preserve the results, it is recommended to follow the doctor's advice especially regarding the injection period: any punctures should be programmed at least four months apart, at the in order to avoid exaggerated allergic reactions.

The effects of Meditoxin can last from a minimum of 4 to a maximum of 6 months, the treatment must be repeated after a period of between 6 and 9 months in order to maintain the results obtained from an aesthetic point of view. The Botox treatment is not invasive at all and lasts less than 20 minutes, much less than a facelift and with less pain and hassle than a surgical facelift.

Not only aesthetic medicine, but Meditoxin is also used for the treatment of benign essential blepharospasm in adult over 18 years old; foot deformities due to spasticity in pediatric patients with cerebral palsy over 2 years old; muscle spasticity of the upper limb following a stroke in adults over 20 years old.